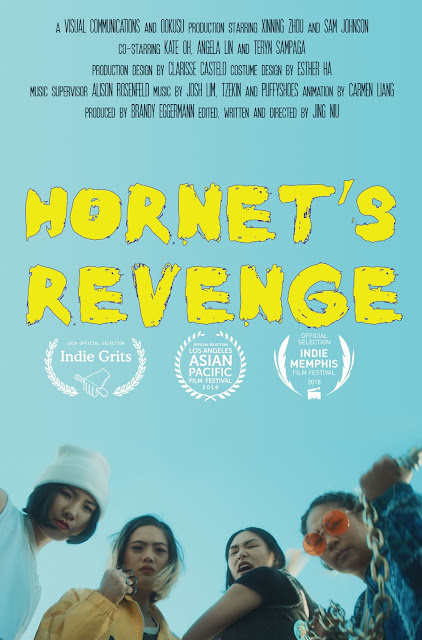 When a creep insults Hornet, the Asian punk must rely on the help of her skate gang to seek revenge.

As an immigrant filmmaker who grew up in the American South, Jing created films stemming from her experiences. In 2016, Jing received the Boreas Traveler’s Grant to retrace the footsteps of a Japanese feminist explorer. Currently based in LA, Jing spends her time creating films featuring independent female Asian protagonists. Jing will spend the fall as a Crosstown Artist in Residence on the east coast, adapting "Hornet's Revenge" into a web series.

I created this film as a Visual Communications Armed with a Camera fellow. This film is the pilot for a longer 8 episode webseries. Although we’ve all gone through experiences that pushed us to the edge and that have silenced us, I wanted to portray the arch of a character who is assaulted but seeks revenge through action. Especially a character who finds revenge through the support of her community, which happens to be an all girl skate gang. As a person who grew up in ethnic restaurants, I also wanted to explore ways to express intersectional lives—mainly immigrant, queer and working class experiences.