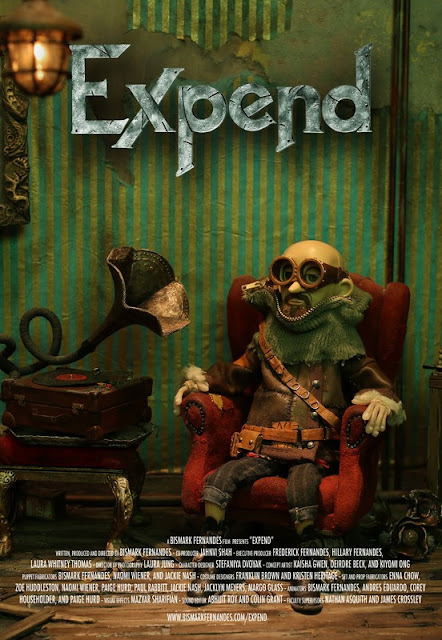 A stop-motion film about a man’s endless hunt for elusive energy sources in a decaying world.

Bismark Fernandes is a stop-motion filmmaker and designer from a Goa, India. He completed his M.F.A in Animation from Savannah College of Art and Design and is currently residing in New York.


Bismark has over three years of experience in designing and creating animated content for Television. He is well versed with various styles of animation with stop-motion being closest to his heart. What draws him towards this handmade art form is that it is tangible with subtle imperfections that makes it unique.

Humans constantly utilize or exploit resources that are available to us. The term resource is used in a general sense, as it can be related to food, water, raw materials or fuel. We use it as a necessity, to survive or use it excessively as a luxury to bring comfort.

The film “Expend” portrays the human tendency to exploit resources for our petty desires. In the story, the character acquires this energy by bringing harm to other creatures in the process. The human character in the film does not feel remorse or guilt for his actions as this is part of his daily routine.

The idea is not to condemn the use of our resources but to think of its source before wasting it.

The medium of stop-motion was chosen to complement the idea of the story. Stop-motion is tactile and tangible. Everything on the other side of the screen is relatable and real. It pushes the boundaries of story telling by connecting with the audience on a personal level.