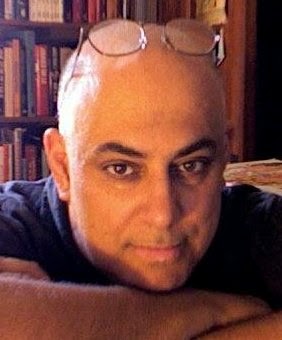 James L. Neibaur is a film historian who has written hundreds of articles, including more than forty essays in the Encyclopedia Britannica. He is the author of several books on film, including The Jerry Lewis Films, The Fall of Buster Keaton, Chaplin at Keystone, The Silent Films of Harry Langdon, Buster Keaton's Silent Shorts, and The Elvis Movies.

Visit his website
Posted by Ross at 4:01 PM No comments: 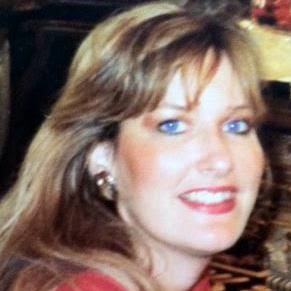 This Wisconsin born Attorney and LA Producer, Director and Writer has made a career out of helping others achieve their dreams as well as furthering her own career in many aspects of film making; be it as a writing tutor, ghostwriter (Sashay Productions), manager or providing career guidance to up and coming actors, filmmakers and musicians. As well as writing credits on an abundance of projects, she has also worked as a reader of the IFP in Westwood, CA, and managed screenwriters for 6 years in Los Angeles (Gold-Dust Entertainment). She has been a stand-in for Cameron Diaz and worked crew on Jason Alexander's, "The Whitey Show." She has been a Member of the Wisconsin State Bar since 1986 and a Real Estate Broker since 1981.

First gaining recognition as a model from the age of five and later with a certificate from Rosemary Bischoff Modeling Studio's, while still in high school, Carey's other credits include crew and/or acting in a plethora of shorts and student films at her tenure at UCLA Film School. She also wrote, shot and edited her own 16mm films and directedand produced five camera shoots at the House of Blues in Hollywood. This was just the beginning of Carey's love affair with film. Carey acquired a variety of educational qualifications with three business degrees from UW-Madison, (Real Estate, Finance and Marketing), and obtained her Juris Doctor from Pepperdine Law School where she studied for one semester at the Imperial College in Knightsbridge and one summer at UW-Madison Law School. She has obtained Professional degrees in Interior and Environmental Design, Computer Graphics, Graphic Design, and completed all the coursework for two more, sans the Internship for Culinary Arts and Cooking & Baking at UCLA Extension. She also attended Art Center College of Design Night program for two years in Pasadena, California, studying art history, photography and life drawing. Perhaps her greatest scholastic achievement is her MFA in Film & TV from UCLA, earned from 1994 to 2002. Since that time, Carey has worked for six years assisting director and actor Mark Borchardt (Northwest Productions), of "American Movie" fame, and produced, cast, acted and did camera on, "Scare Me," and a number of music video's in Los Angeles and Milwaukee, WI. Another such project includes, "The Mark and Mike Show," whereby Jeff Stilson, executive producer of "The Osbournes," followed Carey and her crew around as the subjects of a reality Comedy Central show, during the filming of "Scare Me." Carey made her professional directorial documentary debut with digital projects on racecars, motorcycles and surfing in Malibu and Elkhart Lake since the turn of the century. Her personal blog in 2004 won recognition from AOL as one of the most popular on the Internet. Carey has gathered critical acclaim as an artist and photographer (Life Masters), selling her works in galleries, private commissions and festivals. She has written a memoir of her 24 years in Hollywood and three books on architecture, art, including one on her personal experiences on traveling alone throughout Europe at age 22. As a producer, Carey has a hands-on approach will pitching multiple feature films, cable, network and pod-casts. She participates in all facets of producing; hiring crews, casting, pitching to co-producers, agents, managers and talent, helping with websites, publicity, and with acquiring funding. Her portfolio includes screenwriters that she has co-written scripts with, as well as her own. She has been a screenwriter or script doctor on at least forty screenplays for TV and the theater as of August of 2014. A few films are going into preproduction beginning in September, some with many A-list talent and top music composers. An avid traveler, Carey loves to visit Asia, Africa and all of Europe. She has visited all of the continental US states, Hawaii, and many of the Canadian provinces. This knowledge of the world helps when cherry picking the finest locations for her film making projects. 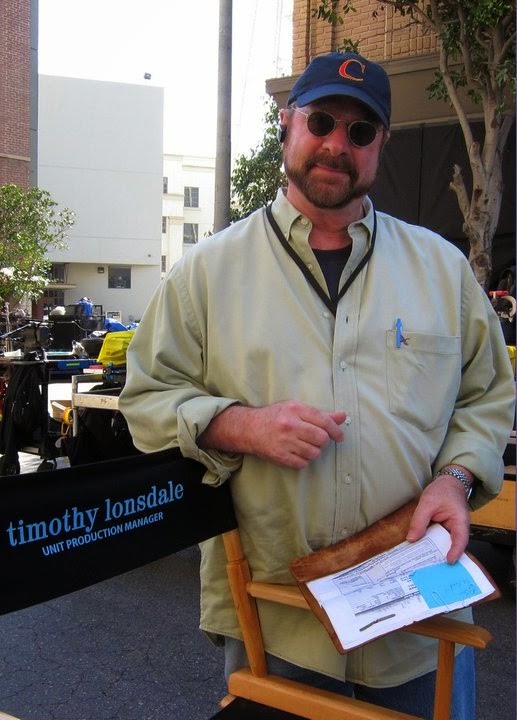 His film credits include:
Second Unit on Snow Falling on Cedars 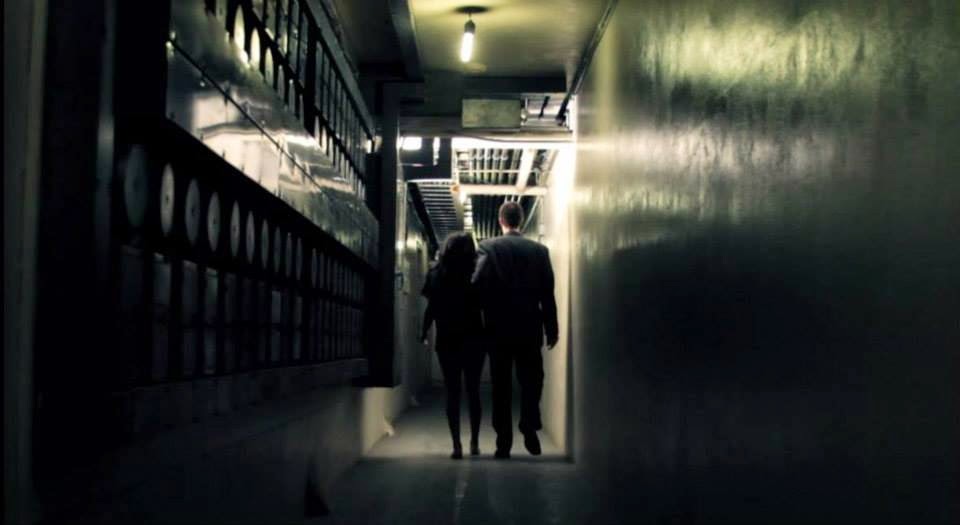 Pam, a homeless prostitute is taken captive and assaulted, breaking free she defends herself. But being a young black woman she is sent to prison for three years. Her word against theirs. Once free she seeks revenge against the powerful men who took advantage of her.
Posted by Ross at 9:10 AM No comments:

Loss by Nelson Oliveras
Milwaukee (MKE Premiere)Running Time: 18 MinutesScreening Time: Saturday, Sept 6th 2:30pm
Tom seeks psychiatric help when his marriage takes a turn for the worse after his wife Sara, having been involved in a car accident, inadvertently causes the death of their young son.
Posted by Ross at 8:00 AM No comments: 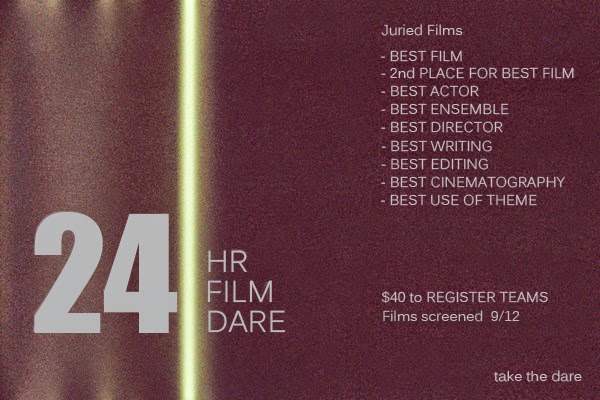 24 HR Film Dare is a new feature to the Milwaukee Short Film Festival. Filmmakers have 24 hours to complete a film during the weekend of August 22nd, and those films will be judged and screened during the 17th Annual Milwaukee Short Film Festival.Registration fees are low at $40. This isn't about picking your pockets, this is about doing something fun.
Film teams can register up until shooting weekend. We'll meet on August 22rd to have teams pick a theme and genres, they then can hand in their films on August 23rd during the Filmmaker Pow Wow  at the Black Rose.

Sponsor and prizes will be announced soon.

Theme will be announced on 8/22 at the kick off event at THE BLACK ROSE at noon.

Hand in your film during the Filmmaker Pow Wow at the Black Rose the next day at noon.

Awards given out during the 17th Annual Milwaukee Short Film Festival

To Register:
Simply pay the $40 fee below. 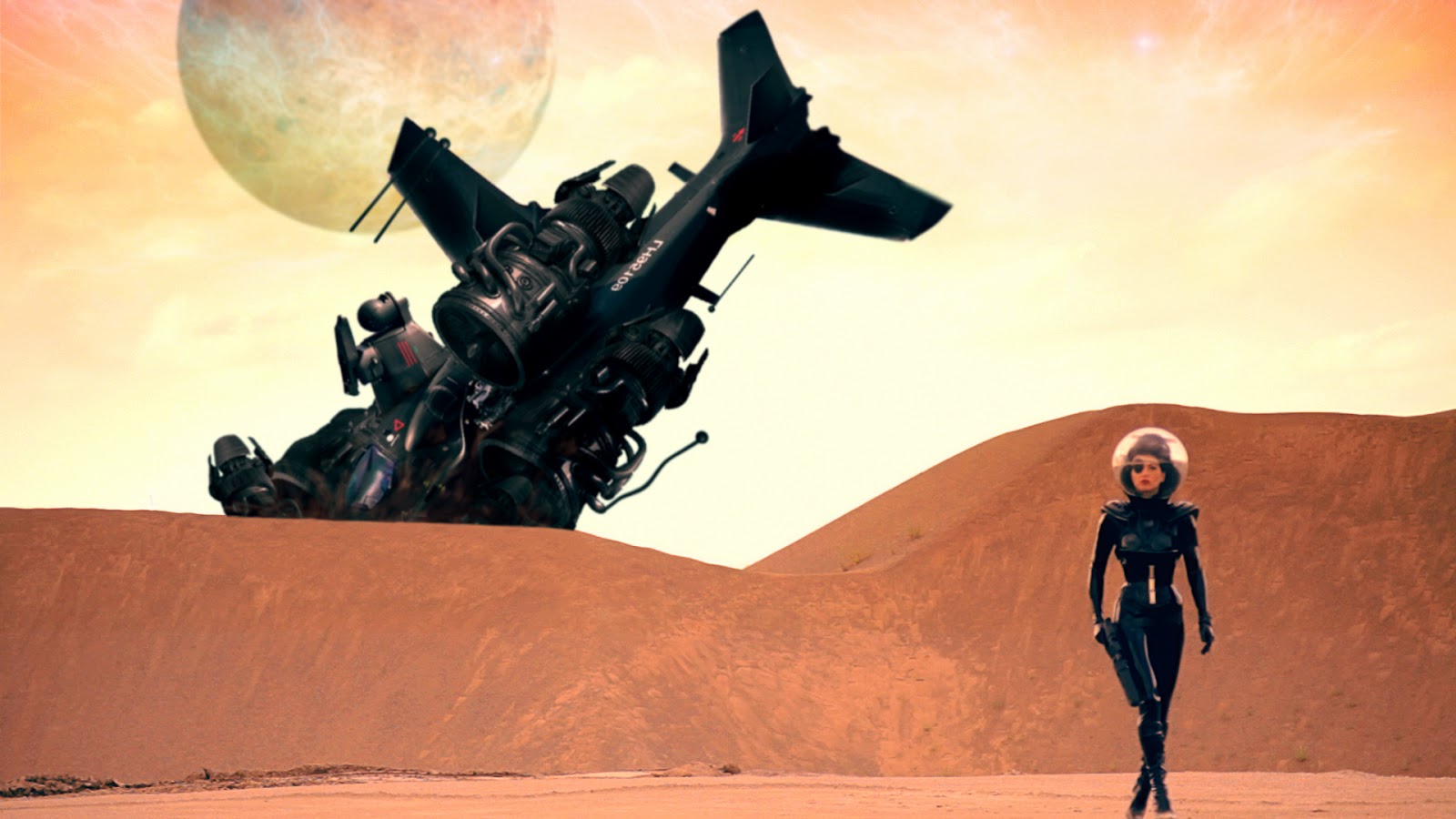 Domina is an intergalactic bounty huntress on the trail of a fugitive SlaveBot. On the heels of a violent space battle, the two enemies crash down on an uncharted desert planet. Stranded, bored, and lonely for companionship, Domina resurrects the comatose SlaveBot to assist her while she awaits her rescue party. An unexpected relationship blossoms between the two beings and Domina's feelings are put to the test when her band of violent Bounty Hunters finally arrive to rescue her. A twisted Sci-Fi tale with a dash of Robinson Crusoe and Romeo and Juliet. 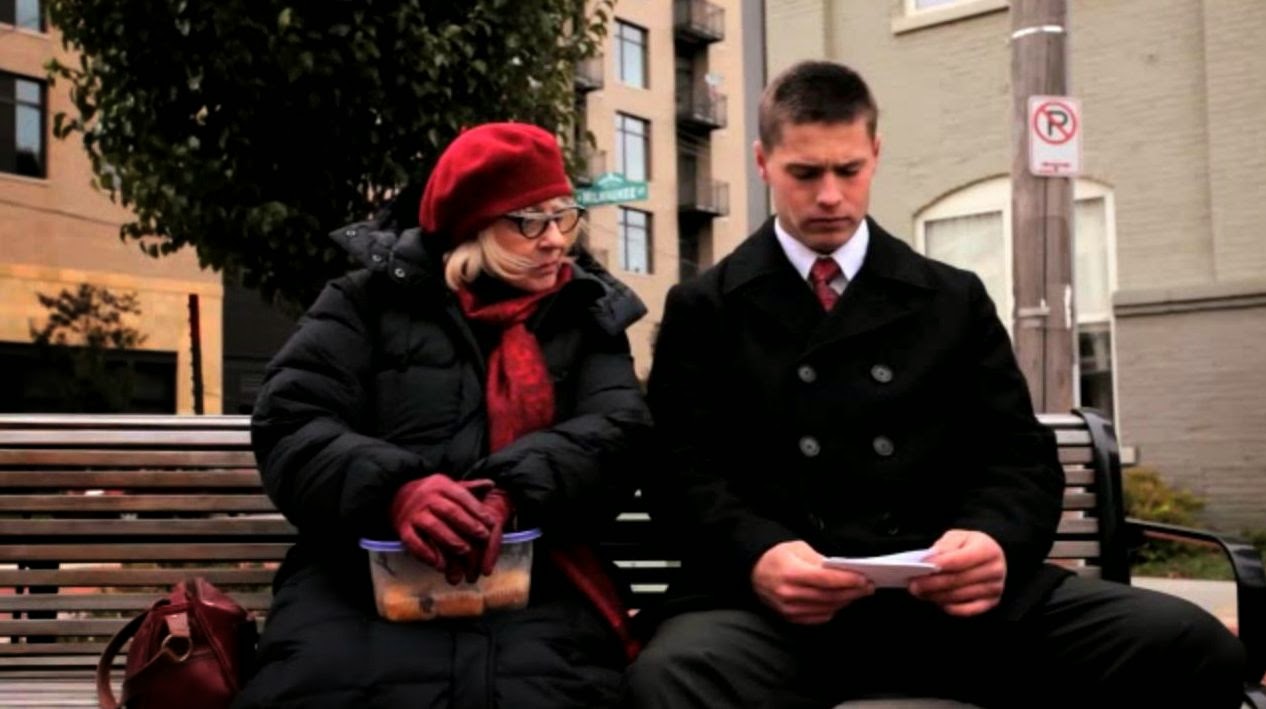 A recent college graduate waits at a bus stop for his first job interview in months. The college graduate sits down and starts talking with a grandma who is also waiting. Both characters learn about each other and realize how unprepared the college graduate is for the interview. The reality of the world they live in is revealed as the bus approaches. Both of them go to great measures to make sure he's qualified.
Posted by Ross at 2:11 PM No comments:

'Tough Cookie' is a grind house film about foxy ladies know as 'Troop Sisters'. They are a crime organization masquerading as a wholesome bake sale organization. Their competing crime syndicate the 'Troop Brothers' is moving in on the Troop Sisters' turf. Caught in the middle of this budding turf war, Madge a former Troop Sister is brought back into the seedy underworld of the Troop Sister world.
Posted by Ross at 9:32 PM No comments: 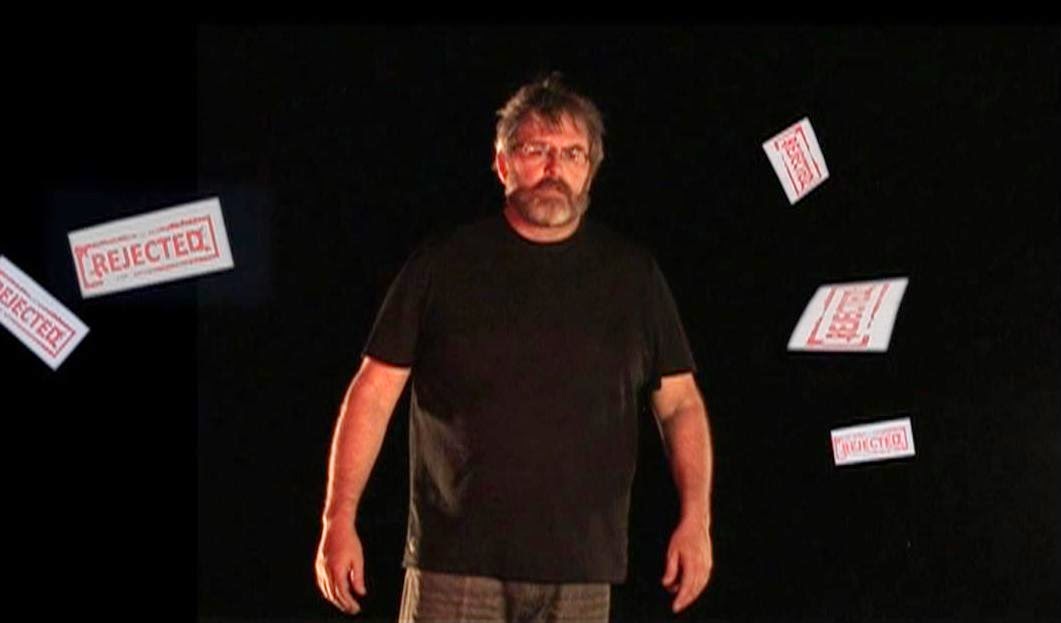 We follow Craig, an aspiring filmmaker, as he desperately tries to figure out the secret to getting into film festivals. The people in his life each have their own ideas and advice. A typical day for him unfolds in a somewhat surreal story that flows from idea to idea. Ultimately Craig discovers just what he needs to do.
Posted by Ross at 6:49 PM No comments: 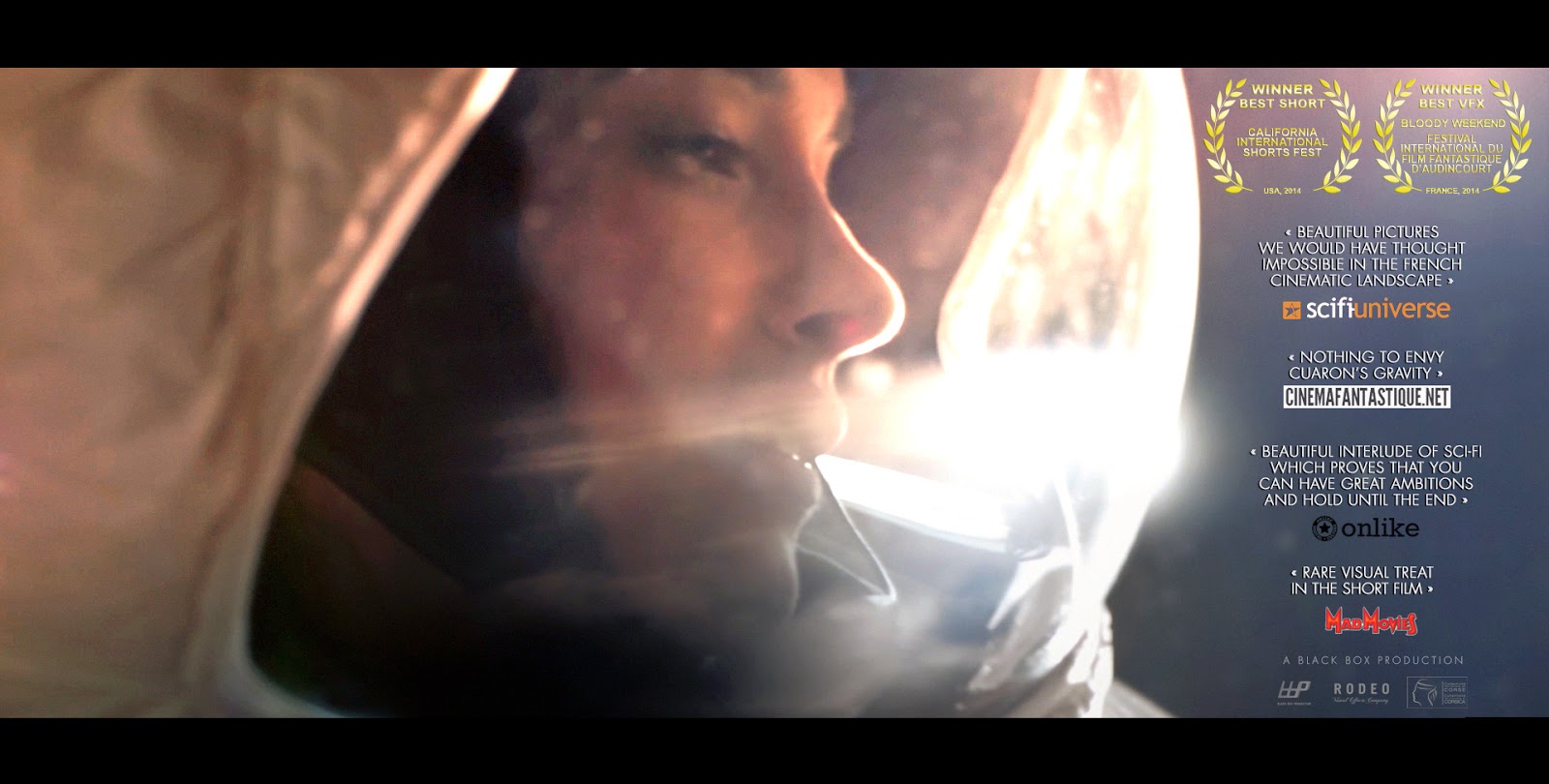 ON/OFF is a french sci-fi short film (13 minutes) produced by Julien Renaud and Thierry Lorenzi, whose theme is transhumanism and post-humanity. ON/OFF follows astronaut Meredith having only one mysterious voice message to stay connected to his humanity. Directed and written by Thierry Lorenzi with Carole Brana (A L'Aventure, Red Nights) and Arben Bajraktaraj known for playing the Azkaban Death Eater in the last three episodes of Harry Potter.

The visual effects company based in Montreal, Rodeo FX (Pacific Rim, Now You See Me ...) is responsible for making credible the sensation of weightlessness. In the end, no less than 150 people were needed to complete this spectacular and mesmerizing odyssey.

In the eyes of Brian Webb, 8 year old Billy Balfoor was 'the most evilest boy on the planet', and the world needed to be rid of him. Fifteen years after his failed attempt at doing the world a favor, Brian finds himself in a sticky situation - Billy Balfoor wants an apology. 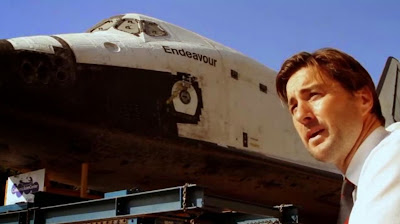