Eva performs a stand-up gig and her intention is far from pleasing the audience. 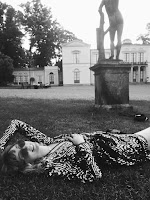 Johanna Nyberg is a director based in Stockholm, Sweden. In 2016 she graduated from Beckmans College of Design with a bachelor of Fine Arts in Visual Communication. She is currently part of the director-duo Cherry Cobra that she launched together with director Nathalie Hallman in 2016. Cherry Cobra is currently represented by production company Hobby Film for commercial film.

Her short film ’Comedians’ earned her a Sundance Ignite Fellowship, a competitive fellowship for upcoming creators under 24 by the Sundance institute.

Comedians is a short film and BFA graduation project by Johanna Nyberg at Beckmans College of Design, Stockholm, Sweden, 2016. Based on female representation in film, I have explored the subject of humor from a gender perspective. Men still dominate the comedy scene and set the standard for what we consider to be funny. Inspired by interviews with female comedians in Sweden I wanted to present their experiences in the field of comedy. Is humor as free and unconditional for women as it is for men?