In this shockingly dark but utterly poignant comedy from Alison Becker and Kimmy Gatewood, a depressed woman contemplates ending her life, if she could just get everything in order first.

Kimmy is a director, writer, & comedian best known as 1/3 of the acclaimed musical comedy trio The Apple Sisters. She produced and directed the feature documentary, Nerdcore Rising, which premiered at the South By Southwest Film Festival. She has since made a splash in the digital world having directed and produced for Dreamworks, Nerdist, Youtube's Comedy Week, Jash/Video Podcast Network, Maker Studios. AwesomenessTV, Yahoo!, Vevo, Awestruck, and hulu. She most recently directed a live-action comedy series “Hyperlinked” for Youtube Red/Disney that explores the world of girls and coding. She also directed Rachel Bloom (Golden Globe Award winning “Crazy Ex-Girlfriend”) in a video for Vanity Fair’s first Founders Fair entitled “LadyBoss.” Other directing projects include “Not Safe with Nikki Glaser” on Comedy Central, the Comedy Central digital series “Junketeers,” “Drumpf vs. Bernie” for Fusion & her series “Milk Factory” for Awestruck, As an actress Kimmy has been seen on Conan, “The B in Apartment 23,” ”Comedy Bang! Bang!,” “The Smosh Movie,” “Jersey Boys,” “Bad Judge,” “Epic Rap Battles of History” and the Netflix series, “GLOW” executive produced by Jenji Kohan. When she isn't acting, directing, or producing, Gatewood has a love for music, she sings and plays the guitar & trombone to her 2 year old daughter. 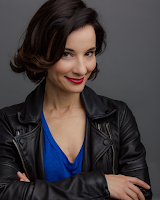 Alison Becker is a writer/comedian/actor/producer who played Shauna Malwae-Tweep, the longest running guest star on NBC's "Parks and Recreation." Alison first gained popularity as one of the pranksters on MTV's hidden camera show "Boiling Points," and she has since appeared on countless television shows, including Showtime’s "Californication," FX’s "The League," HBO's "The Newsroom" from Aaron Sorkin, "New Girl" on FOX, “Curb Your Enthusiasm,” “Kroll Show,” “Lucifer,” and many, many more. You may also know her Xandra Dent from Adult Swim's “Newsreaders.” Alison has written for and appeared in Yahoo's "Sketchy," and she has starred in some of the most popular web series ever made, including "Dating Rules from My Future Self”, College Humor’s Batman series and ESPN’s "Mayne Street" with Kenny Mayne. Becker is also a popular face in many classic videos from Funny or Die and Above Average. You may remember her from her hosting days on Fuel TV's "The Daily Habit," several shows on Fuse, and as the VJ of the weekly "Top 20 Countdown" on Vh1. Becker just produced a pilot for TruTV, and she is currently developing a feature script at Red Hour. She has been involved with the Upright Citizens Brigade theatre for over 15 years, and she has been a member of four house teams, both improv and sketch. Alison graduated from Georgetown University, cum laude, and she is a member of the high IQ society Mensa.


Statement:
Control is a live action dark comedy about a woman who is metaphorically at the edge of a cliff of her own making and trying to control her plummet to the ground. We discover a woman at her darkest hour unable to release herself from her compulsion. And despite everything she does, the harsh truth is that nature is chaotic and unpredictable.
I see this as a tragedy with bursts of comedy where even during the character’s darkest time, she can’t help but try to make everything perfect, as shown in the ending shot where she straightens a bottle of windex before blowing her brains out.
Since there is no dialogue, the score of the movie is created by the sounds in the room: the hum of the air purifier, the scribble of a pen, and the clack of the keyboard. We are in the room with Alison as she contemplates and drowns in her thoughts. The sounds begin a slow, measured tempo of a woman on brink in control of her emotions to the cacophony of sound as she manically and precisely puts together a binder.
The writer and I had many discussions about the ending and ultimately decided that the character needed to go through with the act in order to feel complete. It not only represents the true lack of control despite our best efforts, but also that she ultimately followed through and is released from her own demons. Plus there is an adorable dog.