Artemis and Henri have spent a lifetime together. Loved one another deeply and imperfectly. Four weeks ago Henri died and so much was left unsaid as Henri's mind ebbed away. And then Artemis hears Henri crying in the next room. Will Artemis get a chance to be with Henri one last time? 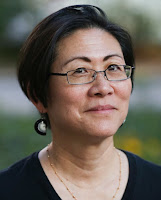 A. L. Lee received an MFA in screenwriting from Columbia University. Her screenplay The Legend of Pig-Eye, which is an adaptation of the short story with the same title by Rick Bass, won the top prize in Film Division Screenwriting Competition.
Her short film, the good boy, has been selected by over 60 film festivals both in the US and internationally and has won several Best Film, Best Foreign Film, Best Director, Best Cinematography, Best Screenplay and Best Acting awards.
A. L. Lee wrote and directed Artemis & the Astronaut. In 2016, she was awarded a production grant from NYSCA (New York State Council on the Arts). The NYSCA award combined with funds raise through IFP (Independent Film Projects), A. L. Lee was able to make her film.

She lives in New York City with her husband, two sons and two cats.

Director's Statement:
When I wrote the script for "Artemis & the Astronaut", I was thinking about love, memory and Kafka's "Metamorphosis" . A few years back, we lost our good friend and neighbor, John, to Alzheimer's. John was a charming man who knew all the best gossip of everyone in our building. Soon after he was diagnosed, so very quickly, John and I became strangers. I watched with frustration and sorrow as John lost the words to express his needs, and I lost my ability to reach my friend.
After he passed away, I remember wishing to have our old John back, even for a moment, to be able to listen to him tell us just one more bit of juicy gossip about one of our neighbors-- much the way Artemis' wishes to see Henri's face just one more time. I wanted this so much I decided to write "Artemis & the Astronaut".
It begins with Artemis thinking she hears Henri crying in the other room, but when she goes to him, she sees there's an Astronaut instead, and ends with Artemis and Henri dancing in the garden to their favorite song, "It Had To Be You". How we get there is the fun stuff.
"Artemis & the Astronaut" is about how illness can transform our loved ones, but not the profound love we have for them.