2015 Films: The Struggle of Libations 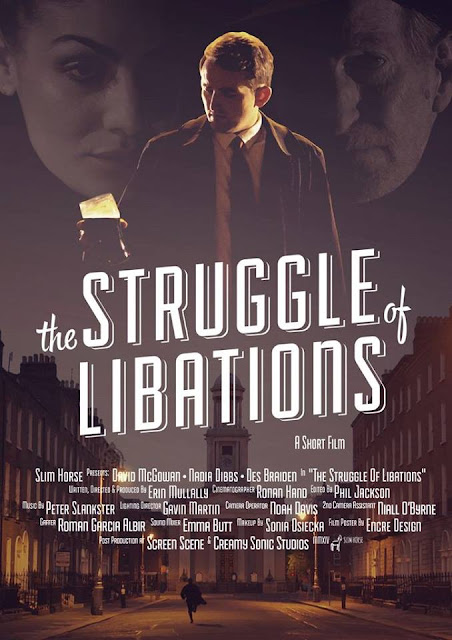 The Struggle of Libations is a short film by first time writer / director Erin Mullally and stars long-time character actor Des Braiden (The Boxer, The Tudors) alongside newcomers David McGowan and Nadia Dibbs.

The film is a “dramedy” and tells the story of a man who undertakes a nighttime odyssey across Dublin while questioning his only meaningful relationship… the one he maintains with his loyal post-work pint.

Post-production work was led by editor Phil Jackson and completed at Screen Scene, with Peter Slankster composing original music recorded by a team of ten musicians at Creamy Sonic Studios.


Erin Mullally is an Irish-American filmmaker based in Dublin.

Erin has produced and directed several online promotional videos. He has also worked in various roles supporting film projects in Ireland, France and the United States.

“The Struggle of Libations” is his first short film. 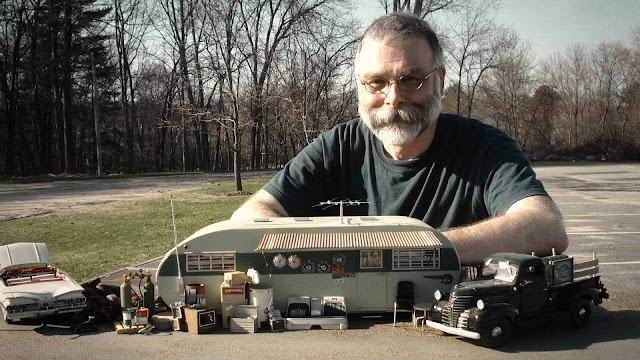 Michael Paul Smith, a reclusive model builder, doesn't seem to enjoy talking about his childhood. In this short documentary about the remarkably detailed town he built by hand, Smith alludes to memories of bullying, violence, and dark family secrets. Elgin Park is a "dreamlike recreation" of his past, he says, polished with the glossy sheen of mid-century suburbia.

Filmmaker Danny Yourd zeroes in on this tension, drawing it out through the relationship between Smith's childhood and his models. Smith is a charming presence on screen; his warm smile elides those painful experiences, even as he explains how they help inspire his work. And while his miniaturized scenes occasionally feature tragedies, the substance of each tragedy isn't the point. "I created Elgin Park so anybody can be there," he says.

This summer, Smith will publish a book of his Elgin Park photographs.It's now available for pre-order. To see more of his work, visit his Flickr page.

The above synopsis from The Atlantic Magazine.

DIRECTOR BIO:
Danny Yourd is the long time creative partner of Steve Hoover: together they created the Sundance winning documentary Blood Brother as well as a wide range of previous work that took them all over the world. Danny received the usage of the p.g.a. mark by the Producers Guild of America for his work on Blood Brother. He is recently premiered Crocodile Gennadiy, which he produced, at the 2015 Tribeca Film Festival. This is Danny’s first directorial effort.

At a local tavern, unhappy citizens share their hopes and dreams and later become aware they have never left their hometown. Which triggers debates and conspiracy theories. 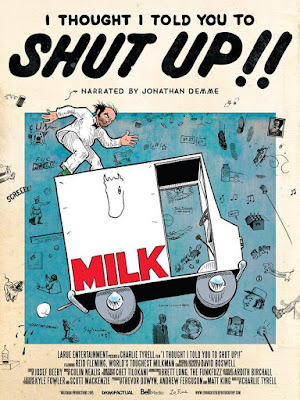 Narrated by Academy Award-Winner Jonathan Demme (The Silence of the Lambs, Stop Making Sense), I Thought I Told You To Shut Up!! combines stop motion animations with interviews from Boswell, his Hollywood friends, and fans as they discuss the enduring appeal of the World’s Toughest Milkman.

A Lounge Singer with a odd name has a strange past.

Mark Maj's extensive film background includes a variety of projects both behind and in front of the camera, as well as screenwriting. His film acting roles include being a featured extra in Clint Eastwood's "Flags of Our Fathers", "Home Alone 2", "Fred Claus", "Mad Dog and Glory","Derailed", "Stranger than Fiction", and "Curly Sue", just to name a few. His Television credits include the starring role in several episodes of The Weather Channel Series, "When Weather Changed History", portraying Chicago's 1st Mayor, "Mayor Ogden". He has also worked on The Discovery Channel's, "Investigation Discovery: Operation Undercover", portraying several mobsters. In addition, Mark co-produced and co-hosted a television series in Illinois called "Random Access".


His educational background in film includes Columbia College in Chicago and the school, Chicago Filmmakers. Mark and his wife Leslie reside in Racine, WI. where they base their production company, Monkey Films.

UPDATE: This film has been removed from the festival. 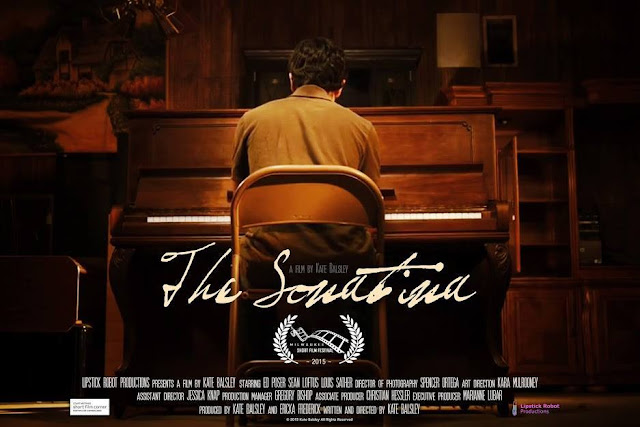 Chris Westfield works a safe but boring job at a thrift shop. One day, by accident, he rediscovers his passion for music. He faces discouragement from his boss, his friends, and even from himself, but he's determined to pursue his talent.

IMDb listing
Posted by Ross at 6:11 PM No comments: 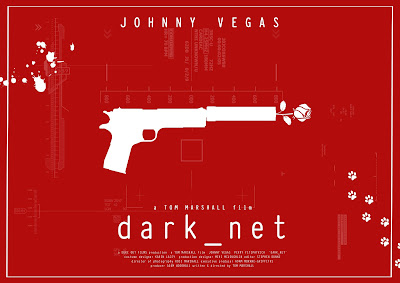 Alan (Johnny Vegas) searches for answers in all the wrong places and this time he thinks he's found them...on the internet in the form of a highly trained deadly assassin. But he's about to learn the true price of entering the 'dark_net'.

Tom Marshall previously won Best Film in 2008 for bigboy_74, and he screened Happy Clapper at our 2011 festival.

Director Statement:
'dark_net' is a completely ungoverned arm of the internet, a "gateway into the abyss, where anything can be bought and sold." When I first read about this 'dark side of the web', I was particularly drawn to the reports of contract killers offering there services to anyone with a bank card. It filled me full of questions and ideas and prompted me to think about how the fantasy would measure up to the reality. What fascinated me most was the idea that a man as 'geeky' and 'normal' as our central protagonist 'Alan' (Johnny Vegas) could get embroiled in a world so deadly.

The idea leant itself perfectly to indulge my passion for stylised, fast paced, action packed and ultra cinematic filmmaking, yet providing me with the opportunity to undercut it in a very comedic, tongue in cheek and British way! Its a film that wears its influences on it's sleeve. Edgar Wright, Nicolas Winding Refn, Luc Besson and Michael Bay (seriously!) have all had a big influence on me, and this film is very much a homage to all those great directors and their work.

The film was made on a shoestring budget using a lot of great local cast and crew from the north east. After a few years directing TV, this film was about making something I wanted to make just for the joy of it. About taking time to craft something that felt really authored and cinematic. However, this came with it's own challenges as we were trying to make something that felt big on a very small budget. But this was helped hugely by the fact we had the amazing locations we did, one of which was actually the inspiration for the skyline in Ridley Scott's 'Blade Runner'. As well as locations, our leading man also helped bring a certain amount of production value! But alongside the amazing Johnny Vegas, there is also some new talent on show, like Craig Lines (Barry) for instance, a man who we discovered in a local gym and who had never acted professionally in his life.

Above all, I want people who watch the film to laugh and be entertained. However, 'dark_net' is a passing comment on the dangers of a world where the first solution to a problem is Google and where having Facebook friends is more important than having real ones. 'dark_net' is a warning that sometimes buying a bunch of flowers is probably better than hiring a hitman.

Director Bio:
Tom Marshall grew up in the Northeast town of Middlesbrough and began making short films with his friends in college. He went on to study TV & Film Production at Teesside University.

In 2007 Tom’s self funded short film ‘bigboy_74' won the BBC New Talent Award, the Think Sync Film Award, ‘Best Film’ & ‘Best Director’ at Milwaukee Short film Festival and later broadcast on BBC 3. It was made on a budget of £300.

In 2008 he was named a ‘Star of Tomorrow’ by Screen International magazine as well as being nominated for a 4Talent Award in the Best Director category.

Tom’s short film ‘Happy Clapper’ premiered at the Edinburgh International Film Festival and is currently being developed into a feature film with funding from Northern Film and Media.

For his TV work Tom has directed 5 episodes of the highly acclaimed and highly controversial comedy 'London Irish' for channel 4 and Company Pictures.

The Independent called it “not only edgy, but most importantly, very, very funny”

He also directed the second series of 'Drifters’ for Bwark Productions and is currently directing 6 episodes of a brand new E4 comedy called 'Chewing Gum'.